DJ Fanci is fierce, energetic, charming, and talented. I’ll let her do the talking.

How long have you been DJing?

I’ve been DJing for five years now. It definitely was supposed to be something I started for fun – my first job out of school was in radio, so I had already formed an interest starting in college – but when I could finally afford to buy my first set of equipment, I started playing around and realized it could be a career. I’m all self-taught. I looked at a lot of videos on YouTube, but never formally took a class.

When did you realize you were good enough to go pro?

A few months in. I was doing mixes and having my friends listen to them, and they were saying, “Hey this is really good,” and it turned into a few gigs. I already knew my music, and I realized I could really rock a party.

How did you move from amateur to pro status?

I just linked up with another DJ who heard one of my mixes; he was one of my cowers, so we were both beginner DJs, and we wanted to get into lounges. I started doing hookah spots and lounges where [the DJ] is more of the background music. Then somebody had a birthday party there, and that brought the biggest crowd I had ever played for. They were dancing the whole night, and I thought, Oh my God, I am doing this! This is me right now! So I started to do clubs after that.

Do you have any tips for someone looking to break into the club scene?

Link up with somebody! I feel like a lot of people are always so scared of people taking something from them or stealing their stuff… Link up with someone to become a dynamic duo or with someone who is where you want to be. I knew this was something I wanted to do, but having somebody to link up with in general made the pressure less intense. That’s a lot to have on your shoulders [when you’re just starting out].

And just do it! [Practice DJing.] That’s so basic, but truly, if it wasn’t for my homeboy, who was like, “Hey, do this gig with me,” I wouldn’t have gotten out of my bedroom. I was too scared to mix live in front of people. I would make a prerecorded mix and send it to people, but you have to put yourself out there. You have to fall.

Do you have times where you fall?

Sure! Recently this happened to me during the holidays. I don’t know what I was playing, but the guests were looking at me like, “Girl don’t ever play that again.” I have go-to songs and go-to playlists. I used to have a joke: “When in doubt, play Beyoncé.” There are certain hits that no matter how many times they’ve heard it, the crowd loves it. Those help me reset and go into another mix.

I don’t create a playlist. I do have a collection of “new shit,” anything that’s really hot that just came out. I strategically play that stuff because some people know it, some people don’t. I do prepare a lot with new music, practice how I would transition. For the most part I’ve been doing it so long I feel very prepared when I go in there. I know I have the music so I can go in any direction I want to go. If it’s less club and lounge then I will prepare a bit more; especially with an all-ages event, I want the flow to be right. Sometimes I do think we get into a flow that we are used to at clubs, but it’s a different type of flow for a corporate event.

What’s it like when you’re a guest at a club?

I just like the party. I started DJing because I love to party, so as long as [the DJ] is paying attention [to the crowd,] I’m good Sometimes I feel like DJs DJ for themselves, but it’s for us! Not you. As long as they can keep me dancing.

I do love when DJs randomly throw it back. Some of the time DJs get into default mode, so we [in the audience] think, Now they’re probably going to play this song. Well, when they can throw you a curve ball, throw some old Nelly in there, then I’m like “Heeeey!” That’s when I start paying attention. When they start playing something cool, then I want to know who the DJ is.

What might surprise people to learn about a DJ?

There’s a lot of music out there – people don’t realize how much – and it takes a long time to really get your library up. I know a lot of DJs are just like, “Oh, you need a few popular songs, and you’ll be good to go,” but some of the stuff people ask you for, the reactions you get to those good hits, that stuff takes a lot of time. It’s a constant thing. You’re constantly looking for music.

Where do you find your music?

I’m on MP3 websites. I’m registered to a couple of sites where DJs share music. A lot of times I like going out and listening to other DJs because then I say, “Hey, what’s that? Is that a mashup or your original?” Of course, Soundcloud. Exchanging music with other people. I just recently had a gig where I had to play a lot of house – non-vocal house – so I reached out to Neekola and said, “I know house is your thing, shoot me some artists you’re looking into.” I like to link up with those people who have a niche to find some cool stuff. 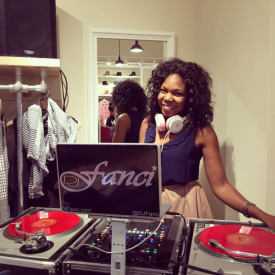 What genre do you specialize in?

“I love remixes. I’m hip hop at heart. But I love pop-type dance music. I spend a lot of time researching hip hop remixes that have a dance movement. Something that gets a lot of attention. Even among other DJs, they’ll say, “Where do you get these remixes, these are crazy!” I spend a lot of time looking for those crossover trackers.

What type of events do you do?

All types. Lounge, club, retail. I’ve been booked for fashion shows, and I do regular in-store DJing. Exclusive retail events with giveaways; I do that kind of stuff.

What should people know about you?

I am a girl power enthusiast. I am all about women doing great things. I love when I meet girls and they say, “Oh I wanna be a DJ…I could never do that!”— Yes you can! You can do that! I love doing awesome women things.

Go book this fine DJ immediately! No doubt you’ll be in good tunes.